Our Night on the Rim, aka How My Backpack Almost Killed Me 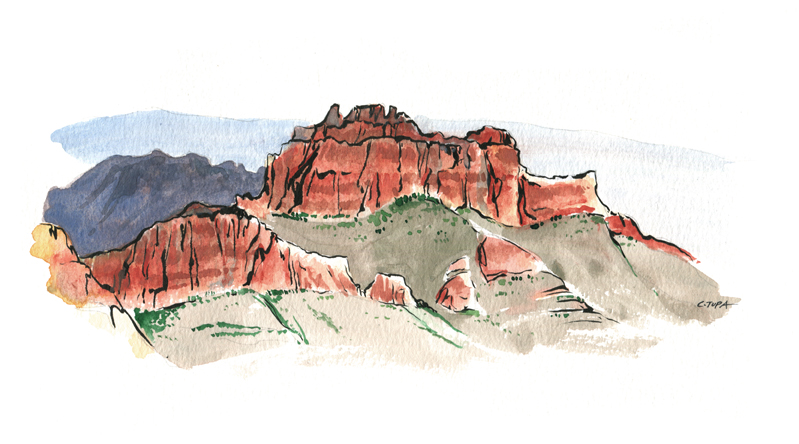 This past year my family decided to celebrate Christmas by spending a week at Big Bend National Park. Our home for the week would be a motel we reserved in the nearby town of Study Butte. However; one night my 11 year old daughter Ariana and I decided to spend on the South Rim of the Chisos Mountains, located in the center of Big Bend National Park. Hearing of our plan, my brother decided to join us on our overnight expedition. Christmas break is a very busy time at the park and all the campsites on the South Rim were taken but we did manage to reserve a site on the North East Rim. We were pretty stoked and my daughter was especially excited. Up to this point as a family we had only been camping a handful of times and never any backcountry primitive camping.

So on a chilly Tuesday morning we left the motel and drove in to the park and up to the Chisos Mountain lodge where our trailhead began. Our trek began with the Pinnacles Trail. The hike started off great and our coats kept the chill off as we began our ascent up the mountain. 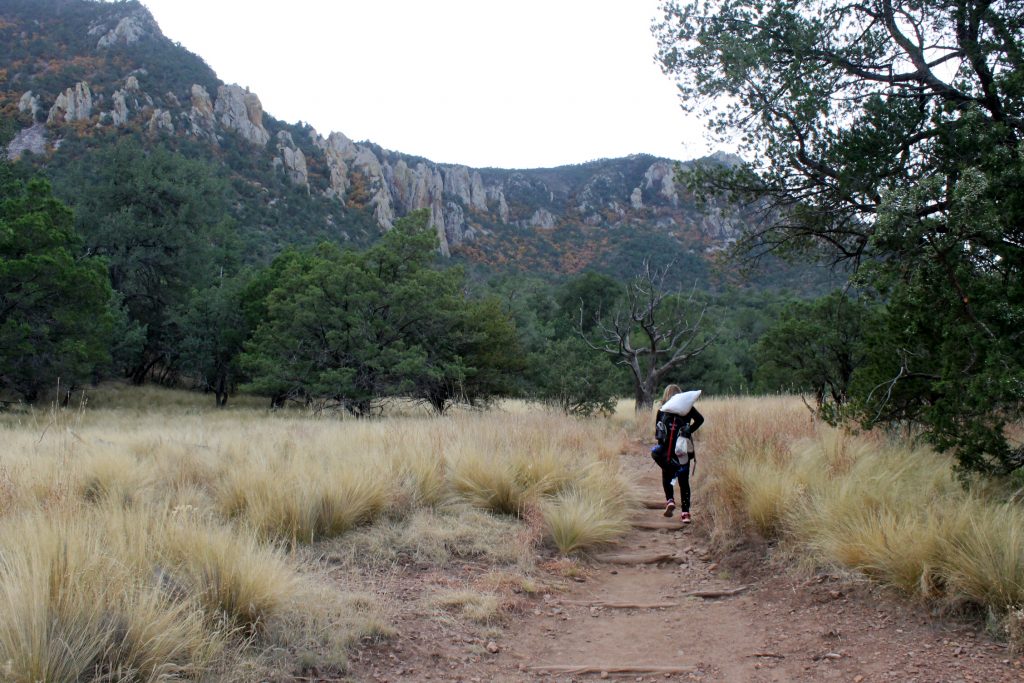 But it didn’t take long to warm up and within the first hour we had quickly shed our coats and strapped them to our packs. It was about this time I realized I had made a terribly horrendous mistake. My backpack was way too small for all the gear I had stuffed in it and strapped on the sides. As I packed for the trip I thought my pack was a little heavy but once I had it on it was a whole other story. It was too small, way overweight and terribly unbalanced. This mistake would plague me for the entire trip. Here is an illustration of how I felt: 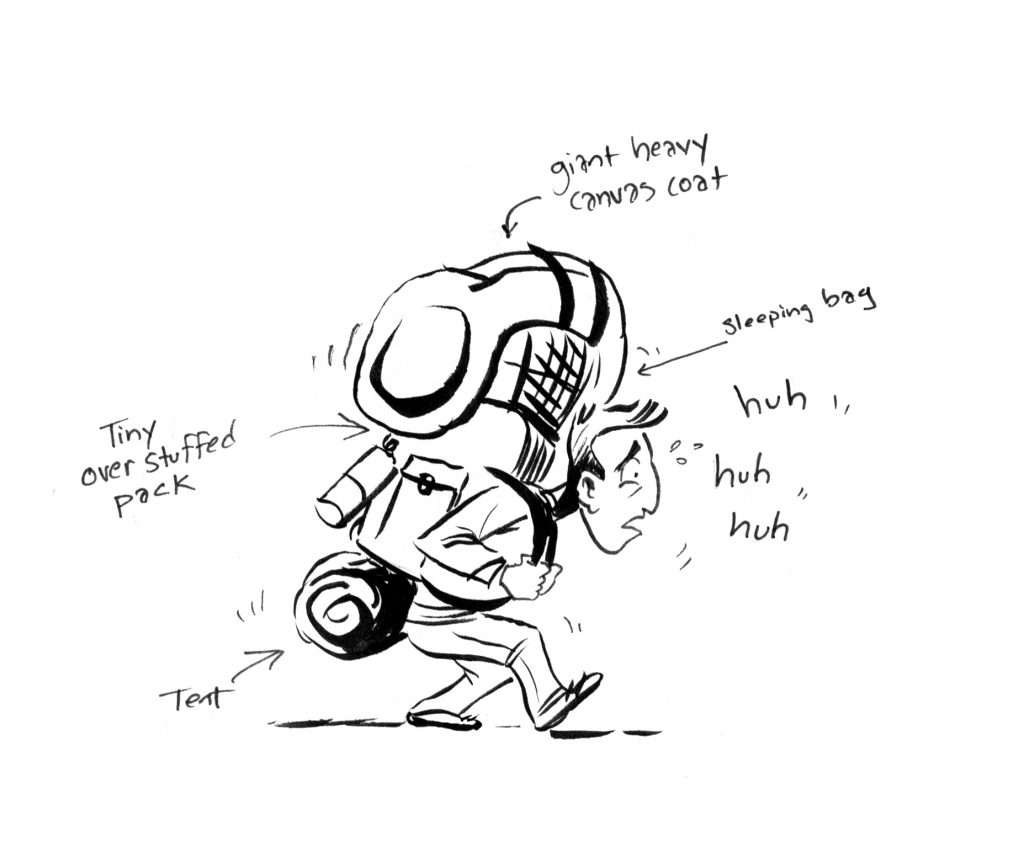 After only and hour or so of hiking my back and shoulders were killing me. I couldn’t believe how uncomfortable my pack was. The pain was really bad but it got even worse. Pinnacles Trail led us up to the base of Emory Peak. To get there we had to traverse about a million switchbacks. This was the worst part of the entire hike, hands down. Going up the switchbacks with my horrible backpack was one of the most painful experiences of my life. It was half way up the switchbacks that I really wanted to lay down and cry. I’m pretty fit, exercise regularly and have strong will power but this was almost the end for me. If I had been alone I would have turned back or even left some of my gear in the bushes. The coat I was lugging around was made of heavy canvas and probably weighed 10 lbs. I needed it for my job otherwise I would have abandoned it on the trail. My daughter was having a wonderful time and there was no way I would disappoint her so I sucked it up and continued on. Besides, I couldn’t go back down the trail and bear to see all those little kids passing me on their way up the mountain.

When we finally made it to the top of those murderous switchbacks we sat down to a well deserved lunch break. The spot we stopped at was perfect for lunch and it seemed everyone else had the same idea. Our lunch spot was also a junction point for several other trails, one of which led up to Emory Peak. We enjoyed our meal of power bars, trail mix and apples and I relished being free of the horrible backpack. There were two huge beautiful bluebirds flying around getting ever closer to us in hopes of snagging some crumbs. 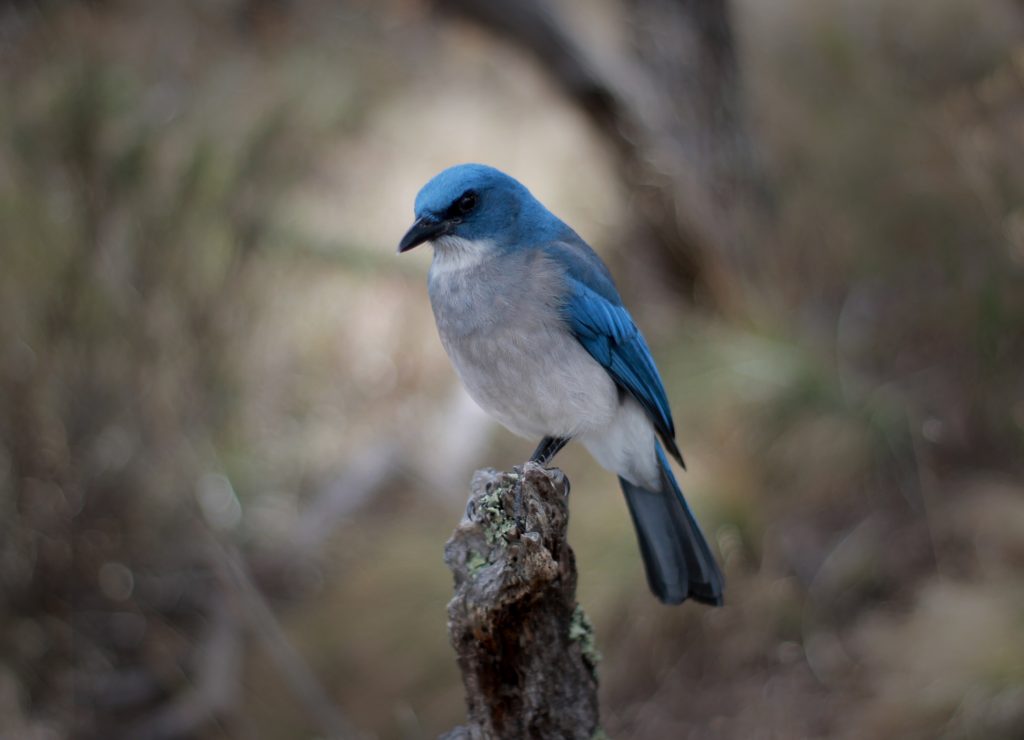 At one point a deer walked right through all of the people sitting around; not even bothered by all the strange people lounging around his home turf. 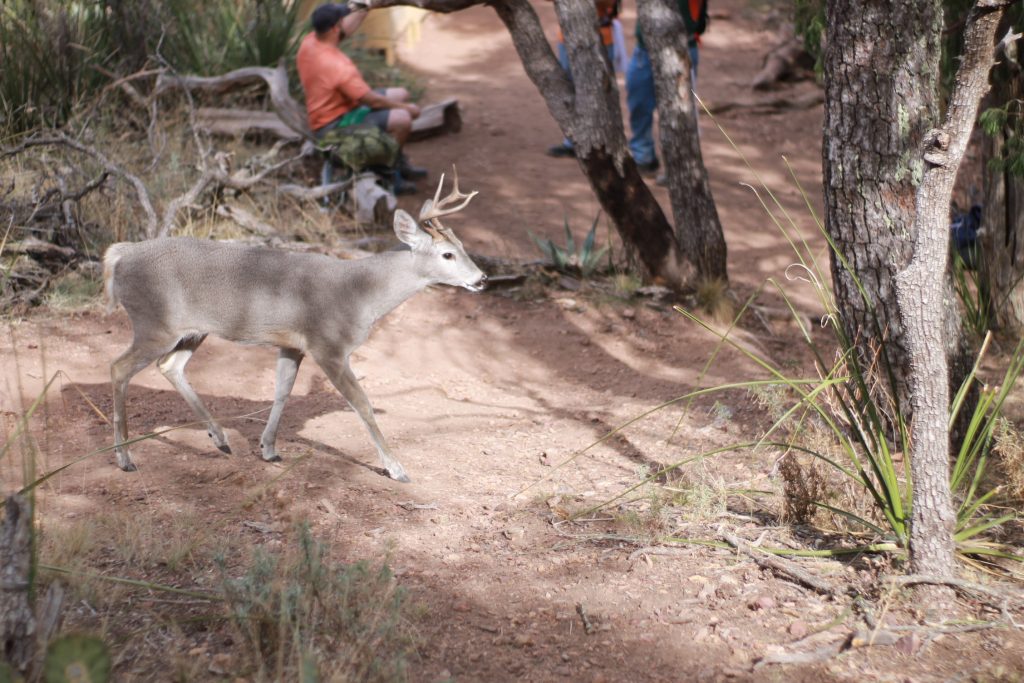 We arrived at the North East Rim around 2:00PM. We located our spot (#NE2) and set up camp. 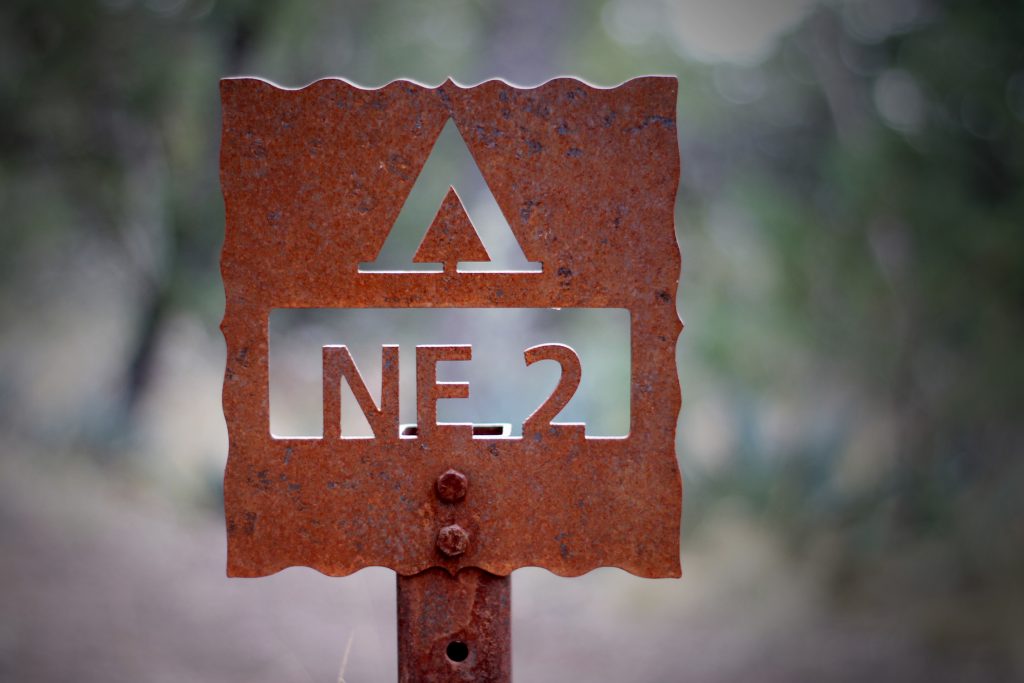 My brother was slightly concerned about the Black Bears that live in the mountains and made sure all our food and toiletries were locked safe in the bear box located at our campsite. I on the other hand was only concerned with two things:

1.Dying from exhaustion from carrying that ridiculous backup up 6 miles of trails.
2.Ariana falling over the edge of the rim. Every time we got close to the mountain edge she walked up as close as she could before I panicked and hollered for her to step back. 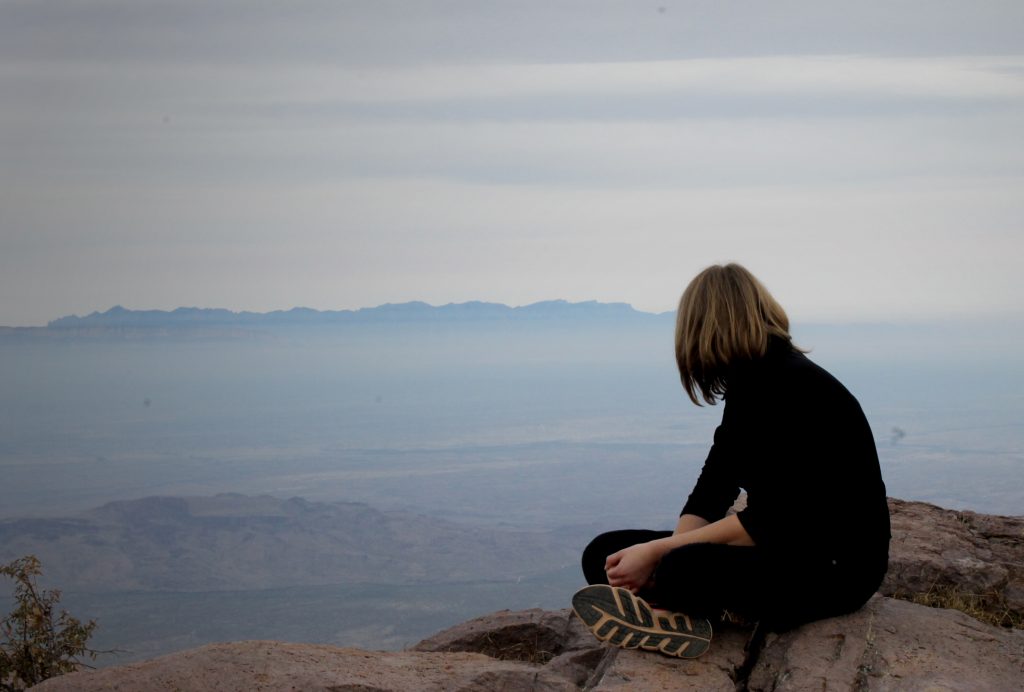 After setup we hiked along the rim, checking out the amazing views while scouting for good locations to have dinner later that evening as well as breakfast the next morning. Our entire evening on the rim we never saw another soul and only a few times did we even hear other people in the area. Back at camp we realized we had nothing else to do and it was too early to eat or go to bed. Luckily I had brought along a book about the history of the Hot Springs that are located in the park, so instead of sitting around staring at each other we took turns reading pages out loud. Reading out loud to each other turned out to be a highlight of the trip. I plan on incorporating this into our future family trips.

Afterwards we ate dinner while sitting on the rim, watching the clouds roll in and the sun go down. It felt like we were the only people in the entire park. It was amazing to sit on the rim in complete silence, looking out over the vast mountains and park land. 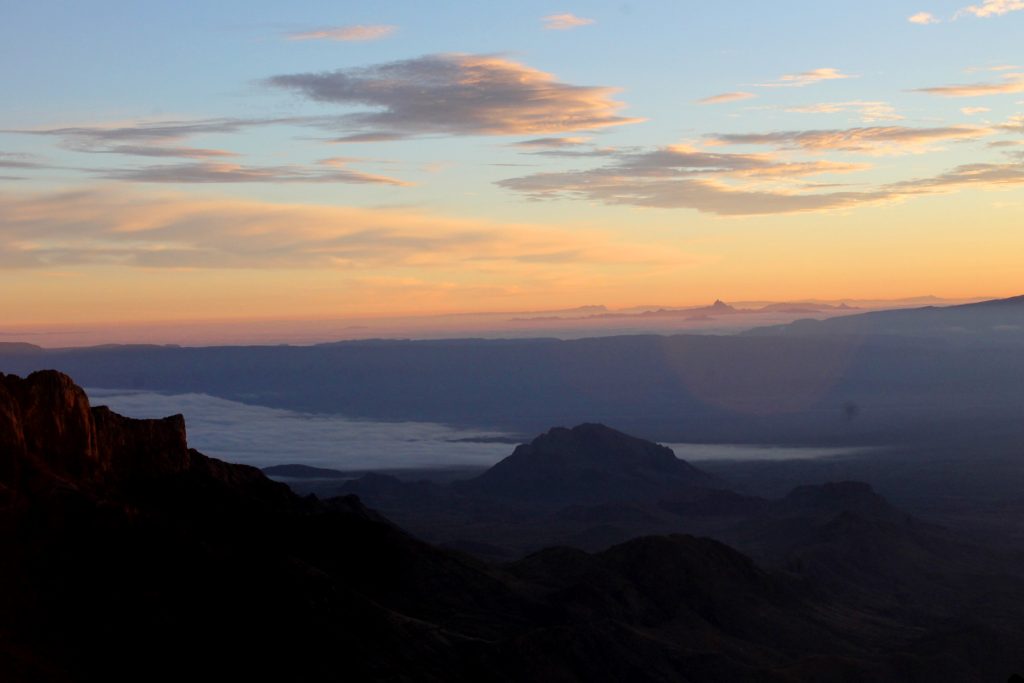 As soon as it was dark we retired to our tents for the night. I stayed up a while, reading more of my book and eventually tired and feel asleep.

At some point in the night I woke up with light shining in my tent. I yelled out to my brother, in his tent; asking what the light was; thinking someone was out with a flashlight and hoping he would investigate. His response was “it’s the moon bro”. I got up and left the tent and sure enough, the moon was so bright it lit up the entire area. It was pretty neat and there was enough light that we even hiked around a little.

The next morning we awoke before dawn and went to our preplanned spot along the rim for breakfast. There was another group of people nearby who had the same great idea. I am sure anyone who camps up there watches the sunrise from the rim; you’d be crazy not to.

After packing up we began our journey back down to the Chisos Mountain lodge. We were taking a different route back, the South East Rim Trail and then Laguna Meadow Trail, thus we would make a complete circle out of our trip. 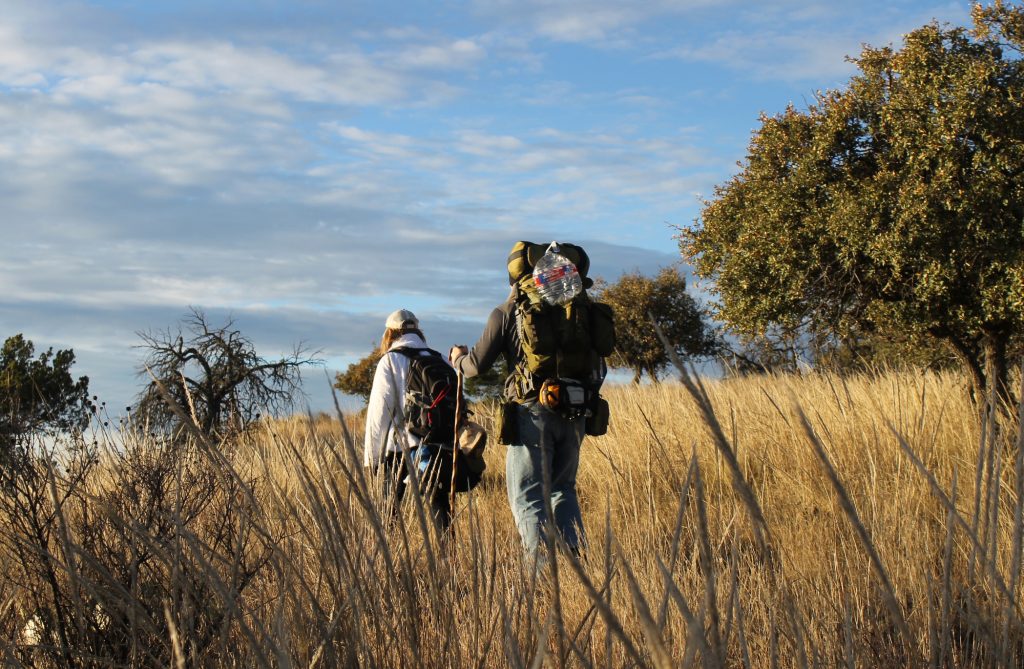 We saw very few people until we got to the last couple of miles or so of the trail, when we started to pass a lot of people heading up to the rim. Going on this trail was much easier with far fewer switchbacks. My one shimmer of hope from the previous days painful hike was knowing that today was mostly downhill. But oddly enough going down the switchbacks hurt my toes because with the weight of the pack and bracing myself as I went down my toes kept pushing into the ends of my shoes.
Eventually we arrived back at the Chisos Mountain lodge and I was so happy when I finally saw the end of the trail! Tears welled up n my eyes and I could finally take the horrible backpack off- oI felt so light and free! 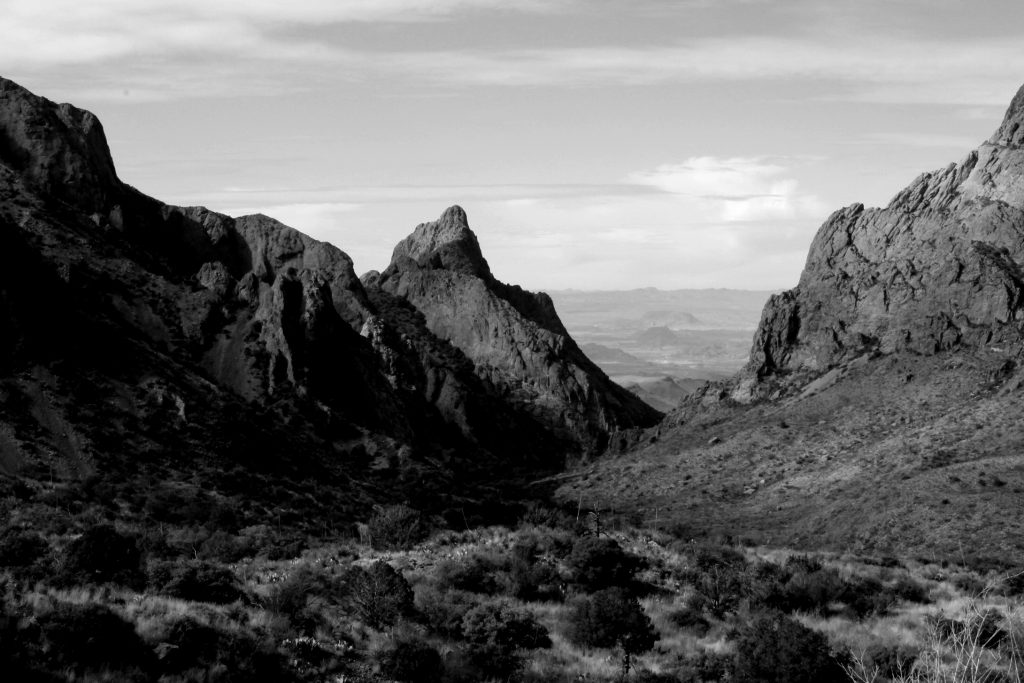 I guess having the right gear really does make a difference. I’d also recommend using a walking stick, that would have helped out immensely.

Ariana enjoyed the entire hike and never once complained. She led the way most of the time and never really seemed to tire, nor did she ever fall behind. She helped with camp setup and take down, and with meal preparation and clean up. I am so very proud of her. When we got back down off the mountain she turned around and said:
“Can we do it again tomorrow?”
She even told me next time she wants to camp on the mountain a week and hike all the trails.

Despite the backpack situation, we had a wonderful time. We saw amazing scenery and had wonderful views of the pristine and pure country. I cannot wait to take Ariana back up the mountain. The only problem is making her wait, she’s ready to go back right now!