OK, I admit it; I like inspirational quotes, truisms and sayings. I have several cheesy mottos I repeatedly use like; “make every day count” and “why not eat a pound of Kit Kats?” But one of my favorites is  “adventure is where you find it” and I try my best to show this to my kids this. 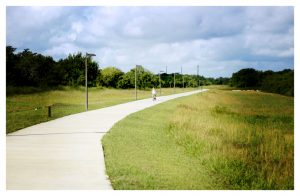 So in keeping with my motto (the adventure one, not the Kit Kat one), we recently decided to spend the morning on the local hike & bike trail. It’s a nice 2 mile walk on a paved sidewalk. It parallels a large drainage ditch which keeps civilization from encroaching any closer on one side and on the other side are several quiet neighborhoods.

If you’re lucky like I was you might spot a garage sale going on and then you can spend $2 on a box of old Care Bear cartoons on VHS tapes. That you then get the pleasure of carrying all the way down the hike & bike trail and back. 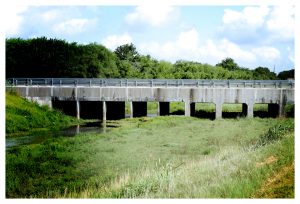 It only took me about ten seconds to decide we were going in. It would normally have taken me less than two seconds but I was distracted by the graffiti painted all over the place; especially the one that said “Free the Robots”.

And so armed only with the light from my phone we ventured into the black unknown. My wife waited outside, 911 on standby. The kids were feeling both excited and nervous; and truth be told so was I. But that’s what makes it fun; right? It’s fun venturing into an unknown black abyss where any number of horrible creatures could be lurking. Our steps were slow and tentative, our ears straining for any sound that would be a signal for us to beat a hasty retreat. 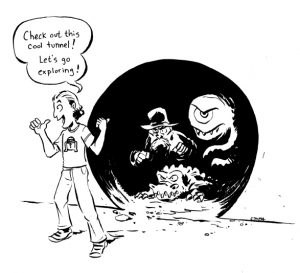 Even though it was only a storm drain, there was a sense of adventure and wonderment that came with exploring the dark tunnel. We had no idea what we would find in there; could be nothing; maybe a bunch of trash, a violent squatter or even an alligator.  After a bit of walking (stooping in my case) the tunnel took a slight turn, and the entrance was no longer visible. That’s when it got dark, really dark; and a lot spookier. The perfect territory for an alligator to be lurking…

The light only allowed us to see several feet in front of us, never showing us enough to fully ease our apprehension. It was pretty eerie skulking down the dark and quiet tunnel, only a small section visible at a time; our voices echoing against the concrete walls. There were small pebbles on the ground and every so often I would toss one ahead of us, hoping to scare off any creatures that may be waiting to ambush us. I swear if my wife had snuck up and grabbed me I would have either had a serious accident in my pants or just laid down and died. Or possibly both.

We traveled on for another twenty minutes or so and then decided to turn back and continue down the bike trail. The way going back was much faster, no longer feeling like mole people, the sense of excitement and wonder over; now we just wanted back outside and in the sunlight.

We didn’t find any treasure or bones, and no alligator tried to eat us and although we were only in the tunnel a short time we did have fun doing something we don’t normally do.

Leaving the Tunnel of Doom, we resumed our walk down the trail, feeling triumphant and giddy; thinking of our next possible adventure. Because, after all; adventure is where you find it.

Now, where can I find some Kit Kats? 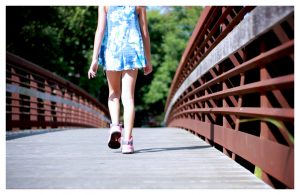 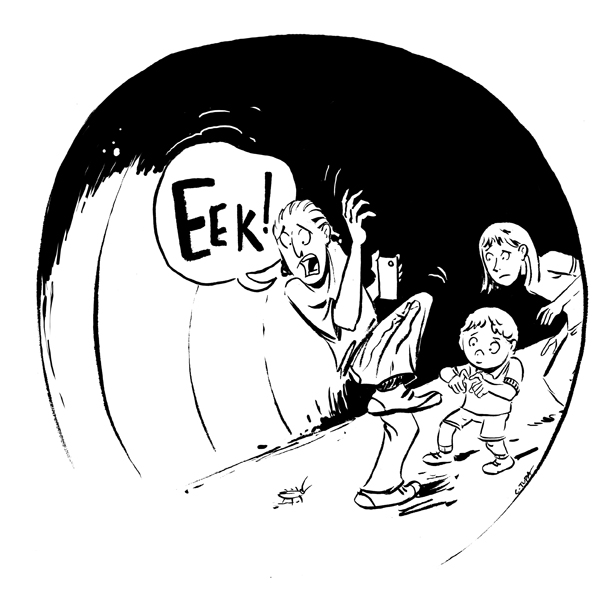 Article Name
Everyday Adventures: The Tunnel of Doom
Description
A fun article about having fun wherever you are; even if it's in a drainage tunnel
Author
Christopher Tupa