5 Questions is a fun way to get to know people, and I really like meeting new people. Everyone has a story to tell and it is fascinating discovering those stories. I also interview people on my podcast Tupacast. If you would like to be interviewed on the blog or podcast please send me an email!

This week we get to know a little bit more about Marc Allie.

1. What would you like to achieve with or during your life?

I want the world to be a better place because I was in it. That is a cliche, I know, but it’s the honest truth. As I’m getting older, especially, I am more and more interested in what my legacy will be. This applies to most all parts of my life. I want to do good from a religious perspective, to share the gospel with other people, and to be a good example of what a Christian is. I want my students to learn about the world around them, to extend their knowledge base and to develop new skills, to become more complete and better people, while they were in my care. As a father, I want my children to be better than me, to be stronger and kinder, and to avoid some of the mistakes I’ve made in life. I want people who read my books or my blog or listen to the podcasts to enjoy them, to smile and laugh and maybe be reminded of a thing or two, or even learn to see things from a different perspective. I want to be able to look back at the end of my life and think, hey, I did some good and had a great life. I think that’s all you could possibly hope for in this life!

2. What is your biggest regret?

I had a really tough elementary school career, but in junior high I made many new friends and my outlook on school changed. One of my best buddies was named James. James was a funny guy, and we had a few classes together, and got to know each other pretty well. We even made arrangements to go to each other’s house a couple times, though we lived pretty far away from each other.

James liked to tease me about band. He had actually played the same instrument in sixth grade band that I had: alto sax. He dropped out, but I kept with it, and got really into band. He’d always see me in the hall and say “Hey it’s Marc the sax guy, I still remember all the notes!” And he’d show off his knowledge of sixth grade level saxophone note fingerings. It was our running joke for years. We were both fans of Kenny G, a very popular saxophonist at the time. We’d always talk when a new Kenny G tape or (later) CD came out.

In high school, I got more and more involved with band, and mostly hung out with other band kids. James and I grew apart some; we were still friends but didn’t do things together very often at all. By the time we were seniors, we barely saw one another. Our final district music festival that year was a big event. I was there at the local college with the band, and James was there with choir. My last performance was on a Friday morning, and there were buses going back to school at noon and again after school. I had decided to go back at noon so I could have lunch with a girl I was interested in dating. As I waited for the bus, lo and behold, here comes James. We shoot the bull for a while, and he tries to convince me to take the late bus. He wanted to play billiards in the student union with me all afternoon. No one was going to check our schedules as seniors, and we totally could have gotten away with it. However, the girl took priority over my old buddy in my mind at that time, and I passed up hanging out with James that day.

The next evening, I was at a party at a friend’s house. We got a phone call that James had been in a car accident. We all rushed to the hospital. We sat in the waiting room and tried to stay positive, pray, etc. James died about an hour after we all got there. I remember being in that waiting room, consoling someone, and I just sort of went numb.

More than anger, or sadness, I was overwhelmed with regret. I had the chance to spend one last afternoon with a good friend who I had unfortunately fallen out of touch with. And yet, I decided to chase some girl instead. It’s an eerie feeling when I think back to that day. If only I could go back and relive that day, it would have been one of the most incredible things that ever happened to me. Instead, my decision compounded what was already a horrible, terrible loss with shame and regret.

3. What is something you would change if you could?

I went pretty serious for the last question, so I will go funny with this one. I’m always harassing my parents about throwing out or selling my old toys, and how much I’d love having them now. Several years back, we were cleaning out toys from my son’s room, and a huge, 1’+ tall Turbo Man figure (from the movie Jingle All the Way) was a casualty. I didn’t think much about it at the time, but I got to feeling bad about it and seeing how I was a hypocrite and all, I looked on Ebay for a replacement. They were expensive, like $200 or more. I may get one for him eventually, but wow, wish I had just hung on to that one!

Well, I could cheat and go with the cliche of spending time with my wife and kids, and while I do get joy from them, that’s boring and too easy. So I’ll use the fact that I am a very goal oriented person. I enjoy setting goals for myself, and working towards them. I’m not a ladder climber, nor am I ambitious, especially in my professional life. I’m talking about my hobbies and personal interests here.

A good example would be the Star Trek haikus I’ve been working on. When my summer break began, I set a goal to watch an episode of the original Star Trek every day. That’s a passive thing, so I decided to flex my creativity muscles by taking a screenshot of the day’s episode, and writing a haiku about it. I’m nearly to the end of the series now, and I have indeed watched Star Trek every day. Sometimes half an ep, sometimes two, but at least a little every day. Looking over what I’ve accomplished so far is exciting and it makes me happy. Maybe that’s weird, but it’s a sense of accomplishment for sure.

I try to set goals for my other interests as well. I use the Goodreads Reading Challenge to motivate myself to read more and more books every year. I have participated in several year-long online painting challenges for my tabletop miniatures. I’m far more willing to sit down and get things done when I have self-imposed deadlines to meet. It even extends to my Transformers collection; there are several toys missing from what I’d consider to be the ideal collection. Every new acquisition gets me that much closer, and when I stand in my office and see how close I am to having all those Transformers I wanted when I was a kid, or how cool my armies of fully painted miniatures look on the display shelves, I’m filled with a sense of pride and accomplishment that could definitely be described as joy!

5. What advice would you give to the readers?

It took me a long time to come to this realization, but the fact is, your own self-worth should not be defined by anyone else. I spent a big part of my life trying to change myself in order to be cool, or popular, or at least, not bullied or teased. I wanted desperately to be normal, so everyone would like me, or at least, ignore me, which would be better than actively belittling me or harassing me. I tried to hide things I did or enjoyed that were considered nerdy. Eventually, I learned better. Your own happiness should not be dictated by other people’s opinion of you. Do not change who you are or what you enjoy just because it’s not what the cool kids do. Seek out the people who share your interests, and you will form lasting relationships with them. In the end, those friendships will matter far more than the bully or the jerk who teases you over your glasses.

BONUS #1: Why did you decide to write your books?

It was another goal I had for myself. I always wanted to participate in NaNoWriMo, the online writing event that happens every November. I’ve always enjoyed writing, and had some experience writing video game news and reviews at Co-Optimus, but I’d never written anything on the scale of a book. I love thinking back to my childhood and what the world was like then, and there were some powerful memories of my childhood I thought would be interesting to other people. November started, and after getting less sleep and watching less TV and movies, 30 days later, I had written 25,000 or so words. I let it sit, unfinished, for a year, before wrapping it up the next November. From there, it was a relatively simple process to get it on Kindle and then in print. The second book was the same: mostly written during NaNoWriMo, finished afterwards, then published. Initially, I just wrote to prove to myself that I could do it, but now, it’s turned more into a constant thing. I’m always thinking, always writing, and hopefully the stuff will be interesting to folks. I Was Geeky When Geeky Wasn’t Cool

Bonus #2: Why do you think you like Transformers so much over other properties?

There are so many reasons! The toys are fantastic, for one. Each one is both a robot, and a puzzle of sorts, and then there are all the cool alternate modes: cool trucks, slick cars, jets, spaceships, and even dinosaurs! Other toys just can’t compare. The original cartoon and comic books only added to my enjoyment. The toys had a rich history, a complex backstory, that I really appreciated. More than anything I think that I love Transformers the most because they came out when I was the perfect age for them: ten years old. Between the nostalgia of that, and the joy of sharing Transformers through the years with my two sons, no other property can compare!
Thank you so much for sharing with us Marc!
Summary 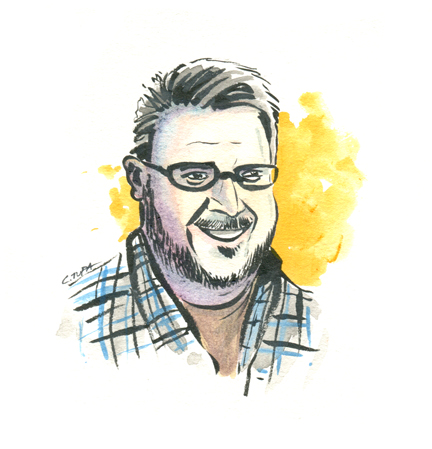