For our summer getaway this year we decided to spend a couple days on South Padre Island. We found a good deal on a condo that is right on the beach and booked a trip for a Sunday afternoon through Tuesday morning. Having never been to South Padre before, we were really looking forward to our getaway.
They weren’t kidding either when they named it South Padre Island, the island is located at the very southern tip of Texas, right on the Texas-Mexico border. Just like most places in the vast state of Texas, it can take a while to get there. We live on the central Texas coast and it took us 4.5 hours to get to South Padre Island.

One of my buddies told me the water at South Padre was very pretty and blue but I had my doubts about that. Every beach we’ve ever been to on the Texas coast had brown, dirty water; nice sandy beaches but gross water. We’d just have to see about this blue water…

After a long drive, listening to movie soundtracks; we arrived at Port Isabel, which is the gateway to the island. You reach South Padre Island by crossing the Queen Isabella Causeway, a bridge that connects the island with Port Isabel on the mainland.
As we approached the bridge -GASP-  I could see blue water extending all the way to the horizon! No way- I must have fallen asleep in the car and started dreaming. “It’s so blue! It’s so blue!” I mumbled repeatedly with my face pressed against the car window, until my kids eventually told me to be quiet. If I had been driving instead of my wife we might have taken a plunge off of the bridge, I could not stop staring at the water. I have never seen water this blue in Texas that wasn’t inside a swimming pool.

Once we were on the island itself we headed north, in the general direction of the condo we had rented. The southern part of the island has your typical tourist/beach/island fare; beach shops, hotels and rental properties. As we drove through all of this on the way to our accommodations, we were also looking for a place to eat lunch. My wife suggested Blackbeard’s and it turned out to be a good choice, and not only because of the food.

The meal was plentiful, tasteful, and surprisingly very moderately priced. The best thing about the restaurant was all the large mounted fish adorning the walls. I don’t know a lot about fish so I can’t tell you what kinds they were but they were really big fish. Although now that I think about it, it is rather morbid to be sitting at a table eating fresh fish while the stuffed dead bodies of other fish watch you from their mounts on the wall.

But regardless of this strange situation, there was one fish in particular that caught my attention; it was a large swordfish head with big fake eyes, wearing a sea captain’s hat while smoking a giant fake cigar. Classic.

After lunch we checked in at our condo;  The Tiki. The Tiki is a condominium where the owners rent out their individual condos to tourists and vacationers. Our condo was one of the most affordable lodgings we could find on the island.

The perks about renting this condo:
There are two swimming pools

The beach is only a minute walk from the room

It has a kitchen, which allows us to save a lot of money by cooking our own meals.

We checked out the rooms in our condo (which was decorated in a chic beach theme), unpacked our gear and hit the beach. It was a Sunday afternoon and the beach was crowded but not shoulder to shoulder crowded like you see on the news sometimes. There was still plenty of room and we quickly found a spot and set up our shade tent. As soon as the tent was standing we were kicking up sand as we raced to get in the water.

The water was slightly warm and shallow with a steady flow of small waves that went out for 50 feet or so.  The air was crisp and didn’t smell overly salty or fishy at all. As I waded out into the ocean I had to stop after only a few seconds; the water was clear! I could see my feet and the sand on the seafloor! That may not sound like a big deal but as I mentioned before, all the beaches up in the central part of Texas have dirty brown water, you can’t even see your hand in front of your face.

I was overjoyed! The fact that the water was blue was a nice surprise but also having clear water was icing on the cake!

I’m sure some of the people on the beach were wondering why I was standing there in one and half feet of water, grinning like the Joker while I stared at my toes.

And it gets even better; In no time we saw small schools of fish swimming around us.

When swimming at the beaches back home there was no telling what was swimming with you in the water.

I do have to admit that swimming under the waves in the shallow water, looking at the fish made me quite motion sick after a while. I guess it was the staring down at the sea floor while the waves buffeted me back and forth. I stayed slightly sea sick the entire trip. Of course each time we got in the water I would look for fish again so that didn’t help the problem any, but I couldn’t resist.

After a while of ocean time we walked back to the condo and went for a swim in the pool. It was a nice change to be in cool, still water rather than the rocking motion of the ocean.

A quick change of clothes and then we drove down to the local grocery store to pick up supplies for the next day and a half. For dinner we bought oven baked pizzas, eggs and cinnamon rolls for breakfast, sandwiches for lunch and then for dinner some chicken breasts to cook in a crock pot that my wife found in the condo. And to accompany that was some couscous and red potatoes. Pretty good eating for a bunch of beach bums!

After we ate our pizzas we went for a sunset walk on the beach. Walking on the beach at sunset or sunrise is always a lovely experience. The beach takes on a different ambience during these times; the skies are beautiful and with fewer people out it’s more peaceful and quiet. 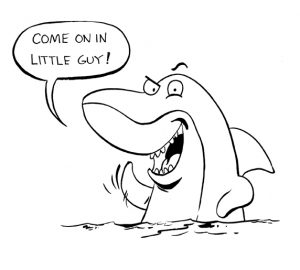 As we walked, my son wanted to get back in the water and swim but I kept telling him no. It wasn’t much long after that when we passed a man who was fishing in the waves, and I kid you not; as we walked by he reeled in a two foot shark! I pointed to the shark and told my son that is why we don’t swim at night, but he still wasn’t convinced.

The next morning we were back on the beach bright and early. Since it was a Monday it never got really crowded and the beach was a lot calmer and quieter. We swam in the ocean for a few hours and when we tired of that, it was off to the pool again before we ate lunch in the room. Then it was more beach time followed by another round at the pool before dinner. We were pretty much in the water all day.

After our delicious crock pot dinner we made a run to the local CVS to pick up some ice cream. We spent the night relaxing in the room, eating ice cream and watching TV. We were all pretty worn out after a day and a half of swimming. 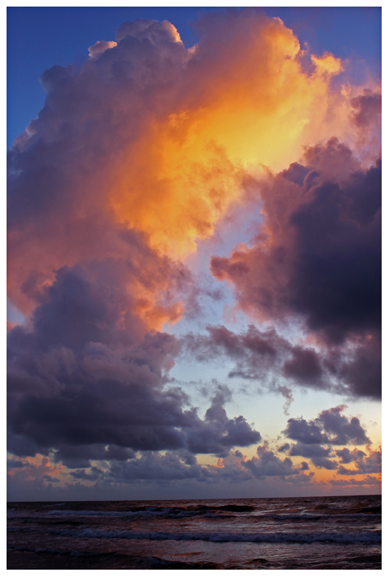 Tuesday morning we got up and my wife and I took a stroll down the beach before we had to go back to the condo to get everything cleaned and packed.

We loaded our belongings up in the car and drove the few minutes to the north end of the island where the road stops at the South Padre Sand Dunes. This section of the island has no development, just lots of pristine sand dunes and beach. I liked this part of the island better, it is more rugged and natural and there are no condos or hotels in sight. Plus there were loads of sea shells here, compared with zero where we had been the past two days. My daughter and I walked a good mile or so, looking for shells.

Once we tired of that we hopped back in the car and began the long 4.5 hour ride home. On the way back over on the Queen Isabella Causeway, I drove slow so we could get one good last look at the beautiful blue water around the island. But we all knew we’d be coming back, soon…